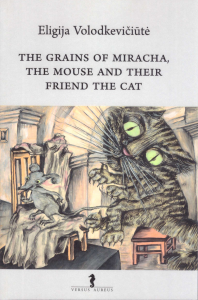 We invite you to purchase a new book – novel for children in English by the known writer and scenarist. This book is a reminder of the hurtful Jewish history, adult and child’s life segment, which was spent in ghetto and rendered in personified form, which is closer to younger readers. The Mouse Luta and the Cat Micius help girl Miracha stay alive and do not starve to death. Also, they help Lithuanian tailor Julius take out the girl secretly from ghetto in the bag made out of fabric cuttings. The action takes place from the establishment of ghetto till the middle of 1943. Spiritual, physical and moral experiences of people are revealed in inhospitable ghetto surroundings and inhuman conditions. Nevertheless the springs of good exist in the evil empire and together with them the light and peace percolate at the end of the book. “Maybe after reading, a person will not repeat the same bad things, which other people suffered at that time?”, asks the author of the book. “The love of relatives and friends and the morality of human are the values, which helped to survive and be a human at that time. I hope that such stories will help us communicate around the world and will not let happen the ghetto again.”

Eligija Volodkevičiūtė (born in Vilnius, 1948) is a member of Lithuanian Writers Union and Lithuanian Cinematographs Union. She learnt in Vilnius evening art school, studied at Philosophy Faculty of Vilnius University and finished the studies of Lithuanian language and literature. She created scripts for the cartoons such as “Mįslė [The Riddle]” (1984), “Rytoj, 11 val. Ryte [Tommorow, at 11 AM]” (1985, was awarded by Writers Union of Kazakhstan), “Jūratė and Kastytis” (1989), “Laimės žiburys [The Light of Happiness]” (1990), “Tas bejausmis robotas [That Senseless Robot]” (1993), “Košmariškas sapnas (The Nightmare)” (1995), “Gėlių dailininkas [The Painter of Flowers]” (1997) and many other. She created more than 50 cartoons together with director and painter Nijolė Valadkevičiūtė. Recent created scripts of cartoons are ”Metai [The Year]“ (2014) and “Mėnulio šviesa [The Moonlight]“ (2014). Some cartoons accessed international festivals or were awarded with diplomas; three of them were nominated for Lithuanian Film Industry Awards “The Silver Crane”. Eglija Volodkevičiūtė has published books for children such as “Stebuklingas pyragas [The Magic Cake]“ (1987), “Rūta ir skėtis ieško dingusių snaigių [Ruth and Umbrella are looking for the Lost Snowflakes]“ (1995), “Katino Pūkio dailės pamokos [Art Lessons by Pūkis the Cat]“ (1997), “Piešiu paveikslą, arba katino Pūkio nuotykiai [I am drawing or the Adventures of Pūkis the Cat]“ (1997), poetry book “Zodiako ženklai [Zodia Signs]“ (1997) and cognitive publication “Lietuvos animacija ir jos meninių formų plėtojimosi pagrindai [Lithuanian Animated Cartoon and Development Principles of Its Artistic Forms]“ (2009). Also, she is an author of many articles on the questions of art and art criticism on Republic level.