Leonid Machlis. The Six Careers of Michailas Aleksandrovičius. The Life of the Tenor (Lithuanian, Russian) 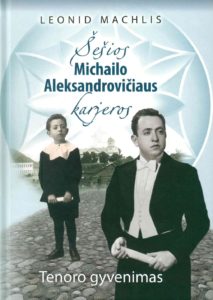 This book is about the world famous singer Michailas Aleksandrovičius (1914–2002) born in Latvia, Biržiai village. His impressive career as a singer began in Kaunas, where, before he was less than ten years old, he performed for the first time in a public concert at the State Theater (accompanied by L. Hofmekler), and received enthusiastic reviews and was named Wunderkind. The book describes the life path of a singer of complex destiny with documentary accuracy. World fame, beautiful and sad moments, blows and gifts of fate – all embodied by a journalist, translator and writer Leonid Machlis in a virtuoso combination of facts and personality maturity in a broad historical context, revealing the cultural, especially musical, political and social life of the 20th century pre- and post-war Europe and the United States. Michailas Aleksandrovičius is known in the world as a performer of Italian, Russian, Jewish opera arias and popular songs. He has also sung Lithuanian folk songs.
Price 20 Eur.