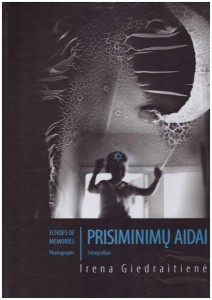 Photography album by Irena Giedraitienė is a book about the personal memory of long known friends, newly met people, family and friends. “Echoes of Memories“ is a distant echo of what people had to survive, it is the reflection of time, which passed and was lost by force. Time is the binding material of the memory palace in this book. The same time, which is recorded in wrinkles, the period, which is characterized by clothing and surrounding signs, and the temporary time, which frosted the windows with cold mist.

The book consisted of two parts, which is connected with the motif of window: the window, through which we are looking to the past and to the present, the window, which opens or hides the outer world and inner life. The first part is dedicated for those who suffered the tragedy of Holocaust. They survived the hell of concentration camps, the loss of family members, and the horror of hiding and now they are looking to us. Their calm presence near us and faces clarified with inner light speak about spirit strength, preserved dignity and ability to look wisely into the present. Irena Giedraitienė took photos in all Lithuania – in Vilnius, Kaunas, Klaipėda, Raseiniai, Mažeikiai, Plungė, but mostly at the house of Jewish (Litvaks) Community of Lithuania in Vilnius, Pylimo Street. She invited people to take photos outside or near the window in the natural light. It is a bright book opening like a window.

Portraits of Lithuanian Jews, who survived the Holocaust, are indelible records and documents of the past. Portraits are often supplemented by symbolic views or signs such as photos, sculptures, and train wagon. And the note under the photo is the map of suffering. Painful geography reminds us the cruelest tragedy of 20th century: concentration camps in Dachau, Oswiecim, Buchenwald, Ereda, Stutthof, Miortvaja Petlia; Ghettos of Vilnius, Kaunas, Šiauliai, Telšiai, Chernovtsy, Gluboka, Balta, Minsk, Orsha, Dzygovka; work camps in Rusashin, Emmendingen, and Freiburg. Or the word “hiding”, which does not specify the location and absorbs all the horror of erasure and being without location. Also, pictures of former Jewish cemeteries in Panevėžys, Klaipėda and Kaunas Aleksotas.

According to the author, this book does not claim the position of historical and documental research of Holocaust. It is the attempt to directly touch such a painful theme. Not all survivors wanted to be photographed and remember the horror of war years. But each meeting was like a gift of fate for Irena Giedraitienė – “sincerity, friendliness, immediacy, goodwill and energy of people fascinated me while taking photos, despite them being elderly and having survived painful experiences”. There are several portraits of Lithuanians, who rescued Jews. The author shares this gift of fate with all reading this book.

The other part of the book “Echoes of Memories“ is dedicated for works of photographer. The time and temporary time is depicted from the other side of the window. If we tried to read recorded history on the faces by looking to the portraits, the postwar period is characterized by song festivals and clothing. And newer times are speaking through the reflections of windows and scenery. Irena Giedraitienė skillfully fixates changes of time by not documenting loud political events, but going deeper into inner world, unique life rhythm and daily moments of photographed people. Portraits interweave with the scenery, photographer often uses the principle of picture in the picture, i.e. characters are communicating not only with nature, people, animals, but also with reflections. Usually these reflections have not only composite, but also symbolic meaning. For example, Irena Giedraitienė “catches” modern young woman with a child near the painting Madonna and Child by Raphael in the gallery of Dresden. In this way, past and present, holy space and daily life meet each other. The book “Echoes of Memories“ becomes not only the window of the past and the present, but also the window of implied future because of such time collisions. It becomes the window, through which the light of photographed people spreads.