The Good Will Foundation is very pleased to report that statues of Mahatma Gandhi and Hermann Kallenbach, a close friend of Gandhi and a prominent litvak born in Rusne, will be unveiled by Lithuanian prime minister Algirdas Butkevicius and Gandhi’s grandson and former governor of West Bengal Gopal Krishna Gandhi on 2 October in Rusne.

The Good Will Foundation has made a considerable financial contribution towards making this project a reality. The idea behind the project is to celebrate the close friendship between the world renowned icon of peace and a talented litvak architect. Kallenbach was born in 1871 in Rusne and after completing his studies in Germany in 1896, he moved to South Africa to join his uncles in Johannesburg. A skilled ice-skater, swimmer, cyclist and gymnast, and a successful architect, Kallenbach acquired considerable property in South Africa. Yet a major transformation in his life took place after he met Mahatma Gandhi.

In 1904 he met Gandhi, who was then working in South Africa. They had long discussions on religious and other issues. He was highly influenced by Gandhi’s ideas of Satyagraha and equality among human beings and became his intimate friend and a dedicated devotee. Kallenbach died in 1945. He left a portion of his considerable estate for South African Indians, but the bulk was left for the benefit of Zionism. Kallenbach was one of the foremost associates and friends of Gandhi, devoting a major part of his life to follow his principles and ideals. Gandhi has frequently mentioned him in his autobiography, where he explains how Kallenbach was his ‘soulmate’ in the early days of the development of his personality and ideology.

Romas Kvintas, the scultor tasked to create the bronze statues of the two men, has recently said in his interview to The Times of India: “I have been researching extensively and collecting visual images on Gandhi for my statue. I have watched the movie Gandhi by Ben Kingsley several times and it has left a major mark on me. The statue is almost 1.9 meters tall. My monument of Gandhi will be one of the finest made on the great Indian philosopher”.

The local municipality officials have chosen a prime spot right next to the river and by a historic Jewish synagogue to install the monument. It is expected to become a major tourist draw besides playing the part of spreading Gandhi’s doctrine of non-violence.

Read more about the project in The Times of India. 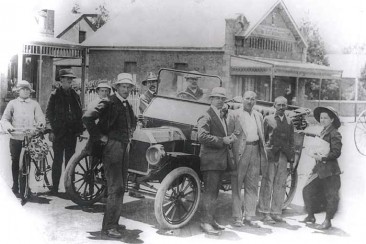