Honored guests and media representatives viewed the unique finds from this summer’s dig at the Great Synagogue complex in Vilnius July 18.

Deputy Lithuanian foreign minister Darius Skusevičius welcomed guests and reminded journalists 2020 has been named the Year of the Vilna Gaon and Litvak History. He expressed hopes for appropriate decision-making to preserve the site damaged during the war and razed by the Soviets for posterity.

Lithuanian Jewish Community and Goodwill Foundation chairwoman Faina Kukliansky said: “Probably Vilnius Jews are the happiest about what has been discovered during excavation of this Vilnius Acropolis. Some of the inscriptions which have now been uncovered on the bima of the Great Synagogue are truly sensational and we must thank this entire group of archaeologists who have worked so conscientiously throughout the digging and have found such incredible things. We don’t have the financial resources to allocate additional funds for continuing the excavation, but everything which has been discovered so far are finds of global significance.”

Chairwoman Kukliansky thanked the archaeologists in charge of the dig, including Cultural Heritage Protection Forces archaeologist Justinas Račas and Israeli Antiquities Authority archaeologist Dr. Jon Seligman, and all who took part in the project. “We look forward with anticipation to 2020, which will be the Year of the Gaon and when Vilnius mayor Remigijus Šimašius has promised the school building built over the synagogue will be removed from the site,” she said.

The Lithuanian Jewish Community wants the site to be open to everyone in Lithuania, both Jews and Lithuanians among others, so that every individual would be able to come, learn about Litvak history first-hand and understand what this ancient synagogue is.

A finding by a group of experts on Jewish cultural heritage was presented at the press conference which said the Great Synagogue cannot be rebuilt but most be protected as a Jewish heritage, Vilnius cultural and attractive historical site. Architect Victoria Sideraitė-Alon presented recommendations made by this panel of experts: “The Vilnius Great Synagogue project should bring attention to bear on conserving and exhibiting the surviving fragments. It should abstain from the reconstruction of any large buildings and the construction of new buildings. The current school building is not appropriate to the site and should be removed. In terms of the space of the Great Synagogue, what needs to be shown first and foremost through tangible experience is what has been discovered and preserved.”

Israeli ambassador to Lithuania Amir Maimon said the great media attention paid to the archaeological dig every year shows how important the site is. He agreed with chairwoman Kukliansky the site is equivalent to the Acropolis and said he hoped it would shine forth as a beacon to Lithuanian Jews but also to Jewish communities across Europe.

Israeli Antiquities Authority archaeologist Jon Seligman showed visitors the large red-granite slab discovered with a Hebrew inscription carved in its face. The inscription says the sons of Haim Shabtai originally of Vilnius and later resident in Tiberius and Jerusalem donated the slab, a stone table top, to the Great Synagogue in 1796. It is thought the table was used for unrolling and reading the Torah scroll. Most of the inscribed Hebrew letters still show traces of the gold-leaf which adorned them originally. Archaeologists this summer also discovered a secret basement chamber under the bimah, coins dating back to the Lithuanian Grand Duchy, the main entrance to the subterranean main hall and enough of the pillars of the bimah to say confidently where the aron kodesh–the ark containing the Torah scroll–is located, which will likely be the target for future archaeological exploration next summer. Portions of a prayer book were also uncovered during the dig and turned over to Lithuanian cultural heritage preservation officials.

Dr. Seligman thanked all the professionals and volunteers who made this summer’s dig even more of a success than in earlier years, including people from Lithuania, Austria, Belarus, Russia, Israel, the US, Canada and elsewhere.

Great Vilna Synagogue archaeological research was partially financed by the Good Will Foundation. 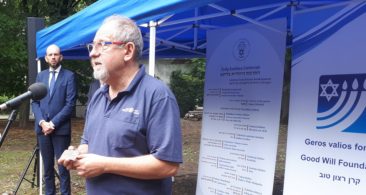