The conference was held in Vilnius, Lithuanian Jewish (Litvak) Community (LJC), to commemorate the 10th anniversary of Terezin declaration, dedicated to solving Holocaust victims’ property restitution questions. The experiences of returning assets of European countries were reviewed. Participants of the event had the chance to meet well-known Holocaust historians, to hear their presentations, to get acquainted with the results of many years of research. Lithuanian speakers had the opportunity to present Lithuania as a good example and to define goals and objectives for the future.

American Jewish Committee (AJC) Director of International Jewish Affairs Andrew Baker reviewed politics of restitution implemented in various countries. He presented examples from US court cases, that are not found elsewhere in Europe, when the victims as a group can issue a case to court and attorney represents the interests of a group, couple examples of such cases are when suits were filed against insurance companies, that haven’t paid insurance claim to the descendants of the Holocaust victims, who made the deposits or the case of forced labor in Nazi Germany. According to A. Baker, France and Austria have solved Jewish property issues, both countries acknowledged their responsibility in regard to seized property and paid compensations.

One must note, that legally Jewish property is divided into communal, private and heirless. “Many European countries, where the Holocaust took place during the WWII, after the collapse of Berlin wall expressed the will to become members of EU and NATO, they had to evaluate their history, often with the help of USA” – remembered rabbi Baker.

Mr. Baker, who knows the situation about Jewish property restitution in Lithuanian very well himself personally participated in making the decisions, when in 2011, after the negotiations that took couple of years Lithuanian government agreed to pay compensation for the seized property of Jewish religious communities. It’s then when the Good Will Foundation was established, to which 37 million euros will be paid in installments until 2023.

According to LJC president Faina Kukliansky, private property question is still not addressed. Lithuanian Jews, settled in other countries, could not recover the property they owned until the WWII, because during the restitution period they had no right to acquire Lithuanian citizenship. At the moment Lithuanian Jews wait for Government’s position and clear decision, what sum of money could be returned to individuals, who has the right to one or another property.

Israel ambassador in Lithuania Yossef Levy named the question of Jewish property “very complicated”, at the same time he emphasized that the time has come for justice and this question has to be solved.

“Huge Jewish community used to live in Lithuania, which was brutally destroyed. Their houses, factories, their land, forest was left across the country. It’s not 1941, after the Holocaust has passed 78 years. We live in other reality and the aim to seek justice is very important. The justice can also be symbolical. Jewish community now lives from restitution money, that are administered by the Good Will Foundation. The money is for the support of Jewish community. There are principles enlisted in Terezin declaration, how to return the private property. This is not only the possibility to perpetuate justice, this is also a question of political morals. Middle and Eastern Europe has not yet restored justice. We speak with Lithuanian institutions with open hearts”, spoke Israel ambassador Yossef Levy.

Jewish Community leaders from Czech Republic, Poland, Latvia and Hungary participating in the conference spoke about property restitution problems and unfulfilled promises of their governments, procrastination of cases in their countries and the prospect of creating new laws regarding property restitution procedures. From their speeches conclusion can be drawn: the more democracy is in the country, the less problems arises regarding restitution and justice for Nazi victims.

The participants of the meeting unanimously agreed, that regional consultation dedicated to the 10th anniversary of Terezin declaration encouraged not to give up, and to continue the consideration of the matter in World Jewish Congress National Directors Forum, which is planned in summer 2020 in Vilnius. “Maybe it’s worth to coordinate the creation of restitution laws with WJC and other Jewish communities” – considered Faina Kukliansky. 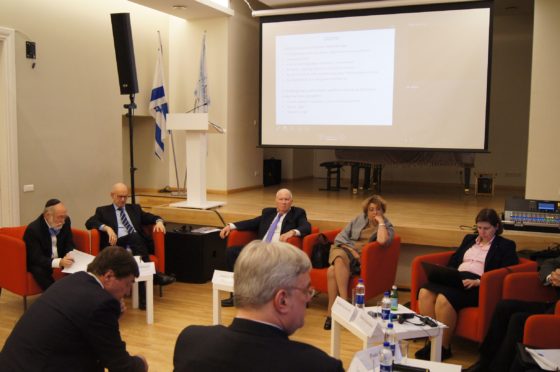