While visiting Utena in Lithuania the author of book told his experiences which were published in the book. The book was released in Hebrew in Israel, translated into Russian, also into English in USA. Latvians are very interested in this book, espeacially in the context of tragic events happened in Daugavpils Ghetto; Germans are interested, too. Therefore, this book is very important for us, Lithuanians, in order to know the memories and history of a person who was born and has spent his youth in Utena. The news about the start of the war reached Kuritsky in his hometown Utena. Unexpected actions of German army forced a sudden adjustment to new life changes. The route Kaunas-Daugavpils was full of vehicles, Russian tanks, hundreds of retreating people, the majority of whom were Jews, to Russia.

On the third day of the war the time was counted not by hours, but by minutes. Chaim Kuritsky travelled with his sisters and mother. They succeeded to get the place in the train going to Riga. Germans stopped the train on the first stop. The majority of Jews were faced with exile and tragic consequences.

Chaim Kuritsky’s memories depict suffered horrors, the loss of his mother, the feelings for his girlfriend. He was confronted with death many times and saw a cruel behavior and brutality of Germans. All these experiences and images encouraged the need to capture everyday life in order to tell this brutality and events during the war to future generations. The book contains many surnames and exact dates.

The publishing of the book was partially financed by the Good Will Foundation.

Tamara Jefremova, a friend of Kuritsky family, publicist and translator, shares her impressions. The author of the book, Chaim Kuritsky, was happy to learn that residents of his hometown will get acquainted with his book, but, unfortunately, he didn’t make it to see the book. The author died in August, 2017. Ch. Kuritsky depicted the route he walked during the war in the scheme. Jewish Ghetto was established in Daugavpils fortress, the place where Chaimas spent the majority of the war time. This fortress is the only example of such buildings of 19th century in Eastern Europe. While preparing the translation, Josifas Ročko, Latvian scholar and the employee of the only synagogue remained in Daugavpils, helped a lot.

Together in one photo – guests and locals from Utena. Ch. Kurickas has died, but his three daughters visited editorial office of newspaper “Utenos žinios” in Utena. Some parts of the book were printed here. 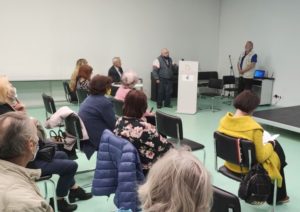