On 8 April, on the occasion of the Holocaust Remembrance Day (Yom HaShoah ve HaGevurah), the Embassy of Israel in Lithuania organised the ceremony, which was attended by Viktorija Čmilytė-Nielsen, Speaker of the Seimas (Parliament), the Minister of Foreign Affairs of Lithuania Gabrielius Landsbergis, representatives from state institutions, the Ambassadors of Israel, the U.S.A., and Germany to Lithuania, Faina Kukliansky, Chair of the Lithuanian Jewish Community, and Holocaust survivors.

Photos © Ministry of Foreign Affairs of the Republic of Lithuania 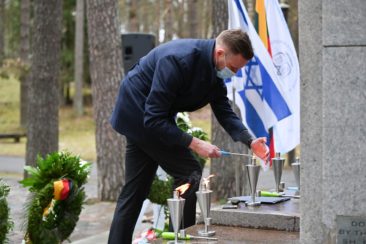