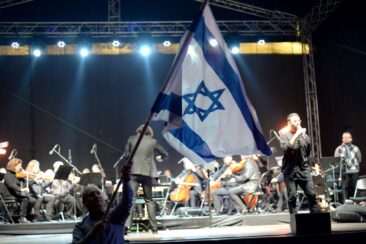 The 22nd Vilnius Book Fair started on February 24 at the Lithuanian Exhibition and Congress Center Litexpo. The Lithuanian Music Fair “Music Hall” organized by the association AGATA presented a CD “Symphony from North Jerusalem” created by the composer Jievaras Jasinskis.

In 2021, on the commemoration of the 80th anniversary of the Holocaust, the young composer Jievaras Jasinskis, in collaboration with Tadas Daujotas, the author of the idea playing ancient Hebrew instruments – shofars, co-created an unprecedented musical project “The Symphony from North Jerusalem”. The premiere of the work took place on September 23, to commemorate the day of the genocide of Lithuanian Jews, in the courtyard of the Presidency of the Republic of Lithuania.

Project was partially funded by the Good Will Foundation.